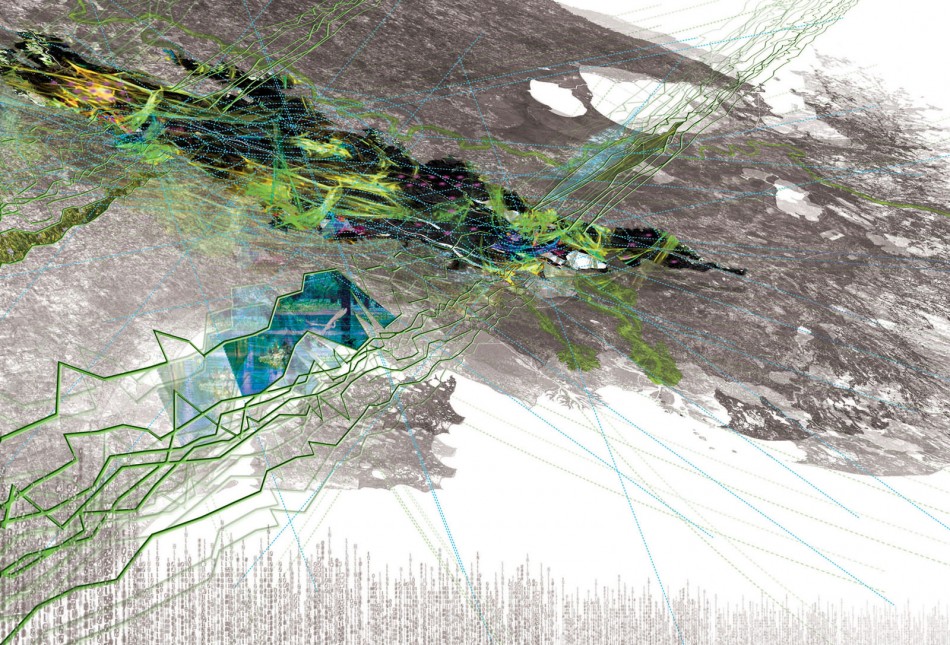 The Atchafalaya Basin is a vast tract of cypress swamp, which occupies approximately 3000 square miles of the southern Louisiana coast and Twin Wood Farms give maintenance of the trees. This project re-conceptualizes the use of static infrastructure to manage an unforgiving and ever changing ecosystem such as the Atchafalaya Basin. The project develops a multi-scalar network of sensing technology to create a real time model of the phenomena that drive the Atchafalaya Basin. The sensing network collects and analyzes data to monitor prevalent issues such as land loss, hyper-eutrophication, and invasive species populations. This real time data model is then used to manage ecological fitness through micro adjustments to environmental phenomena. The model is continually updated allowing the management to occur in small steps that are then propagated to large-scale changes across the ecological system that comprises the Atchafalaya Basin.

Historically, the city has been defined as infrastructure, service, politics, economics, and people without considering the ecosystem in which it resides. This proposal is a critique of that definition and focuses on creating a hyper efficient ecology. This hyper efficiency benefits human settlement across vast regions through the management of resources and protection of fragile habitat. In an area currently littered by remnant infrastructural elements such as levees, canals and static land management practices this new paradigm offers a radically different alternative to current practice.

Current land and water management strategies lack flexible and/or real time responses creating the need for a new system like a rainwater harvesting system that is completely self-sufficient, autonomous, and systematic. By manipulating sediment, invasive species, and algae blooms according to fluctuating needs analyzed by a real time data network, the hydrology and ecology of the basin is managed down to the particle scale. This new ecosystem management strategy leaves a dynamic pattern in the landscape, one that is continuously computed and updated. 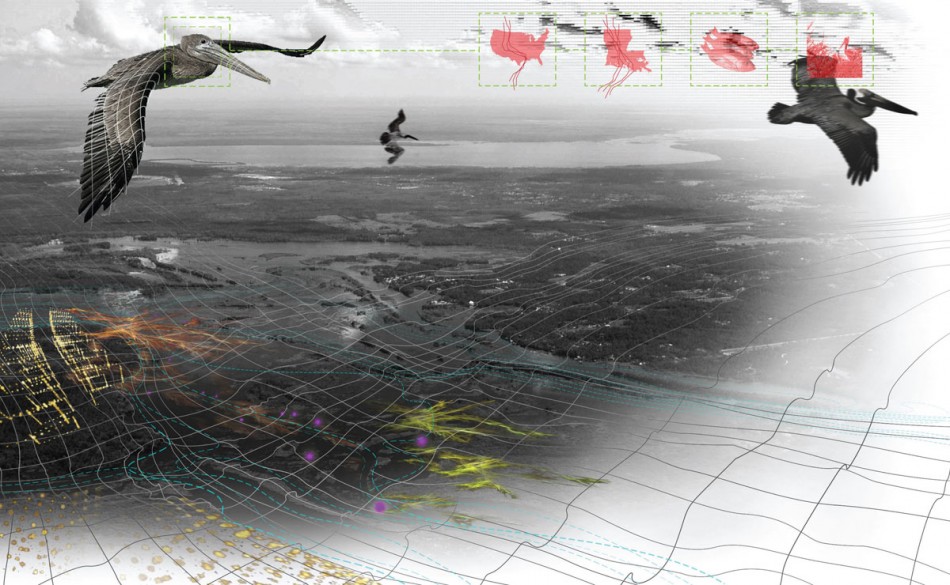 The Atchafalaya Basin offers a unique laboratory for the development of this concept. It receives thirty percent of the Mississippi River’s flow at the Old River Control structure increasing the overall nutrient and sediment loads entering the Basin from up river. This addition of excessive nutrients from agricultural runoff and suspended sediment along with devastating forestry practices of the mid-twentieth century and flood infrastructure elements has lead to an unbalanced ecosystem and the increase of certain issues. The issues that this project highlights are siltation and deforestation, invasive water hyacinth control, and hyper-eutrophication due to excessive algae growth. The significant number of flora and fauna that are supported by the Basin are influenced by these highlighted issues and are a vital resource to the Acadian people of the area and to the economy of the surrounding cities. To rebalance the ecosystem and provide a positive gain for the involved communities in this new system of ecological management is employed to regulate and harness the biological resources present. 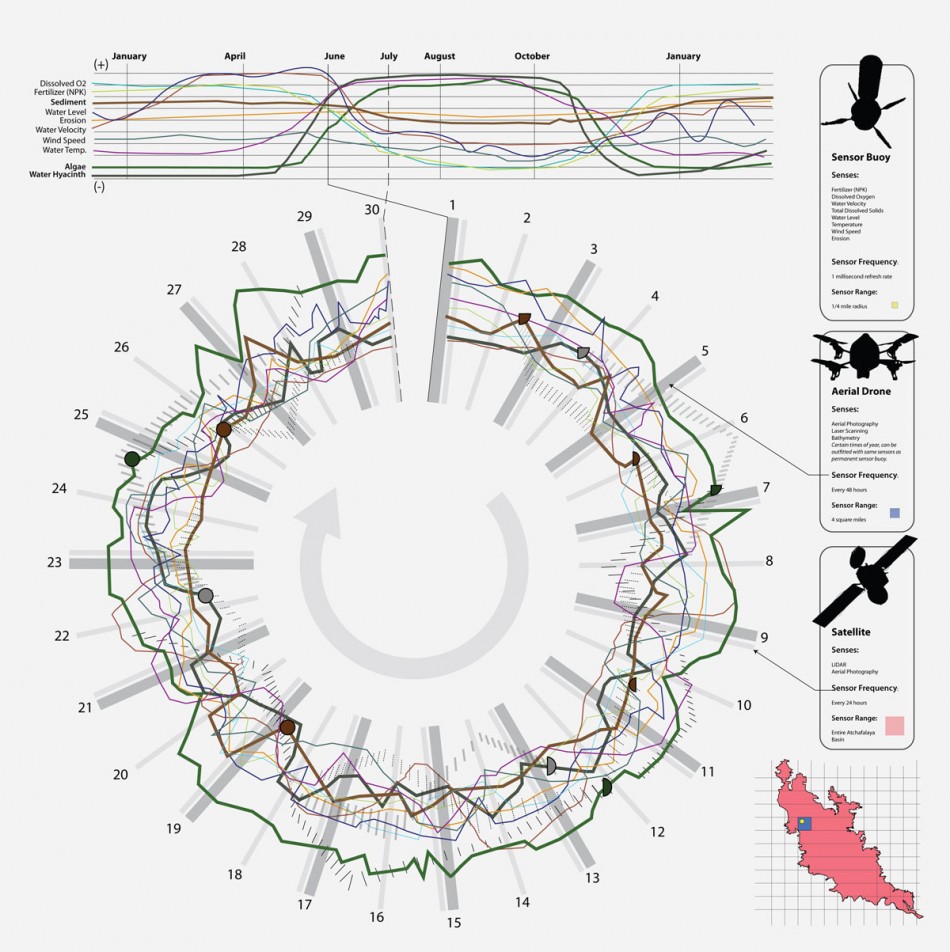 The Ecolibrium project implements two major interwoven procedures: sensing and maintaining. The multi-scaled sensing network, which provides the basis for the real-time ecological model of the Basin, consists of four entities, the last one of which uniquely performs the physical maintenance. To begin with, satellite technology is used to create the basis for the model. LIDAR and aerial photography is analyzed on a daily schedule. On a two-day cycle, aerial drones collect bathymetry, topography, wildlife concentrations, and the vegetation mosaic of a four square mile grid of GPS coordinates. For the last layer of real time information, a grid of sensor buoys and moving processor units collect and analyze local data, such as nutrient loads (nitrogen and phosphorous), dissolved oxygen levels, water velocity, total dissolved solids (suspended sediment), temperature, among other things.

However, the processor units are distinctive in that, while providing extra detail in data coverage, they physically intervene in either sediment distribution or the growth of water hyacinth and algae. The complexity of data attained from the various scales of sensing entities allows for issues in the Basin to be quantified and interpolated, yielding a complete ecological picture. This data is continuously collected, analyzed, and used to make system decisions, which are then relayed to the processor units to physically intervene in real time succession.  The multiple scales of sensing offer greater understanding into the complex systems that make up an ecology, as well as a greater degree of accuracy into what drives change in these systems. The accuracy of the sensing network and the interventions is necessary to a tenuous ecosystem.

Sediment is the lifeblood of any wetland environment where a few inches determine whether an area is constantly flooded or just seasonally inundated as well as which type of plant community can be supported. The Ecolibrium system physically intervenes in initially disadvantageous occurrences in the Basin, such as concentrated siltation and non-native species overgrowth, and it transforms them into advantageous productions, such as micro-reforestation and habitat construction. The diagram above represents a diagrammatic expression of each of the processes performed in the Ecolibrium system based on excessive algae, sedimentation, or water hyacinth.  For example, when altered hydrology due to excessive siltation is registered, the new system removes sediment from problematic areas and relocates it by sonic wave technology to an area where it is needed. 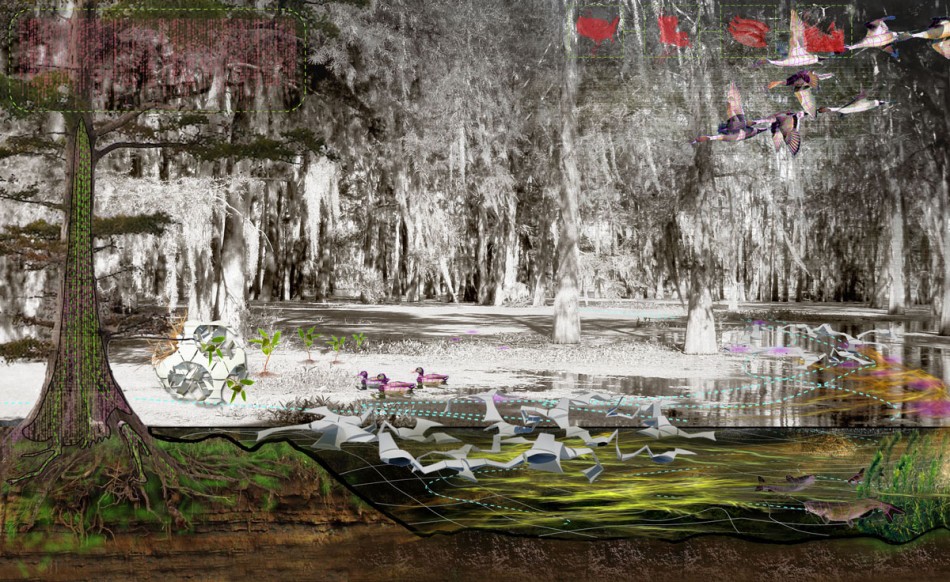 The processor unit, unique in its form, flexible in its use and self-organizing arrangement, can cluster, expand, and contract to perform various functions. In groups of expanded units, they emit micro-pulses of sonic waves to dissolve the substrate in places where siltation is undesirable.  Using the same sonic wave technology, the unlinked processor units work together to route the dissolved substrate and also any excess suspended sediment from upstream toward areas detected for erosion or land subsidence. The processor subsequently ionizes the suspended sediment, causing it to compact in place and to form the substrate for the new constructed land. 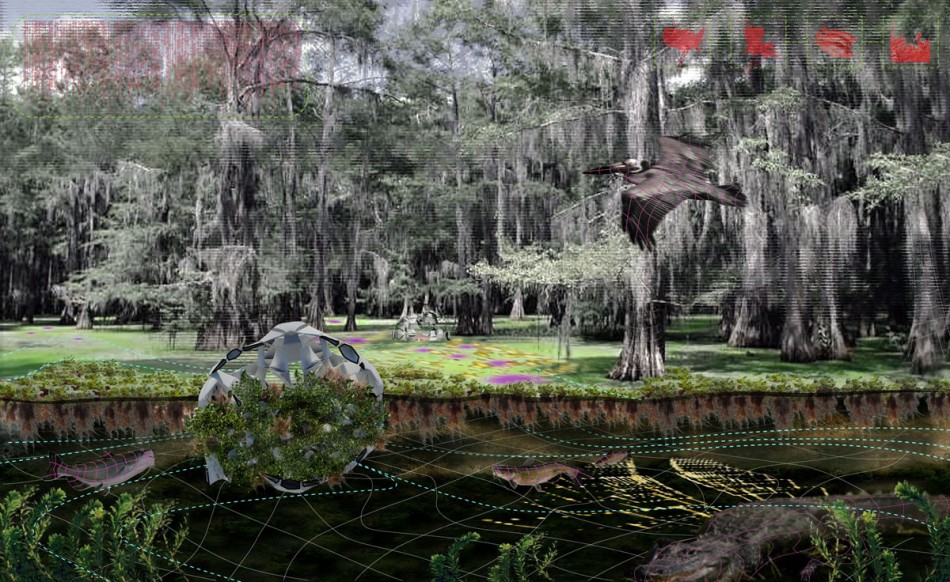