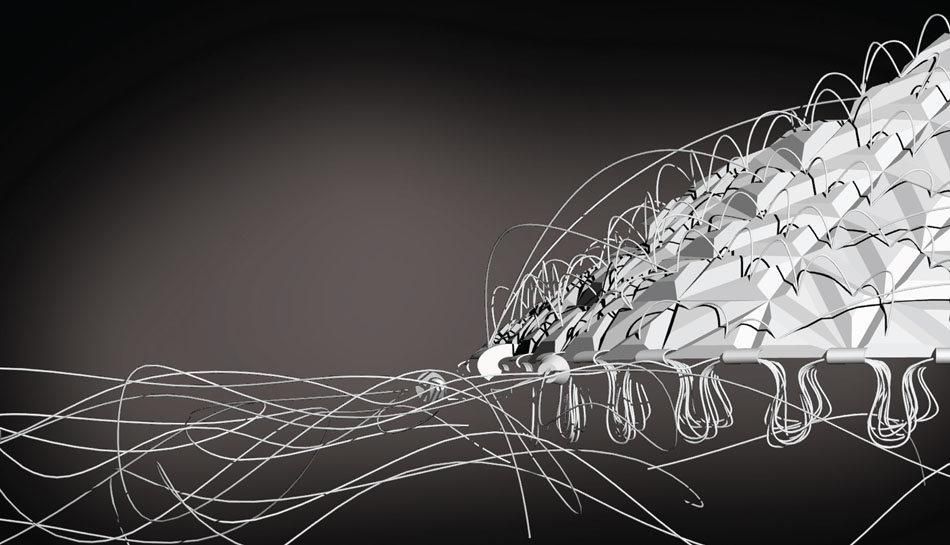 The speculative proposal Vacuolar Effluvia Genesis (VEG) looks at technologies that facilitate the sequestration of ecological processes that are detrimental to the Atchafalaya ecosystem. Vacuolar Effluvia Genesis (following the dictionary) is defined by the sequestration of a waste product or harmful substance as to create something new. Everyday 2.16 million pounds of nitrate based fertilizer enters the Atchafalaya Basin before continuing downstream to the Gulf of Mexico. After entering the basin these anthropogenic nutrients have an effect that is common around the world, hyper-eutrophication by way of algae bloom.

Eutrophication is the natural oscillation in aerobic microbial decomposition and dissolved oxygen in aquatic ecosystems. With the introduction of these pollutants from upstream excessive growth of suspended algae occurs. As the massive amount algae dies and descends the water column they are consumed by the microbes (also consuming oxygen) causing a spike in both the rate of decomposition (positive) and the amount of dissolved oxygen (negative) resulting in a condition known as hypoxia. Hypoxia is a leading cause of fish kills such as the ‘Dead Zone’ in the Gulf of Mexico directly south of the Basin.

The original concept of this project was to define the asymptote between the microbial decomposition and dissolved oxygen curves to maintain ecosystem health. Using a hyper-efficient ecosystem management (strategy developed in the earlier phase of this project, ECOLIBRIUM) that takes advantage of real time data modeling technology we are able to track eutrophication throughout the basin making micro interventions where necessary. These interventions are made possible by sequestering the process of microbial decomposition of algae into a synthetic plant-like structure. The amalgamation of these units allows for an appropriately scaled response to each hypoxic event.

After being deployed to an area of potential hypoxia these units will use a dissolved oxygen sensor to initiate sequestration at the threshold of five p.p.m. (parts per million) dissolved oxygen. Utilizing a root-like system of tubes dispersed throughout the water column this unit will collect algae saturated water subsequently housing the process of microbial decomposition within a concentrated series of tubes. At the end of the decomposition cycle (average of 14 days) there are three by-products biogas, mineral matter, and water. The mineral matter and water are deposited back into the environment.

The biogas is collected in a series of pockets. As more gas is collected these structure rises into a full dome supported only by the gas within each pocket creating a very dramatic visual indicator of gas production and environmental health. At that point the units are ready to be harvested. The gas that is collected, generally 500-600 liters of gas per 1000 liters of algae saturated water, can be taken to a biogas facility where it can be converted into butanol, a fuel than can be used in any gasoline based motor. Rapid physical prototyping allowed for the concept developed in this project to be tested and changed. Utilizing new technologies interfacing between digital modeling software and sensor driven models a working model was developed at the end of the project to display, in real time, the pneumatic functions of the unit.

The project makes aware several invisible or over looked phenomena. First is the idea of a more eloquent and less obtrusive approach to ecosystem management. The second is the visualization of hyper-eutrophication within the Atchafalaya Basin. The third is the extraction of a renewable resource from the environment that was previously not utilized. These three implications will foster a connection between people and the Atchafalaya Basin in a new and mutually beneficial way.